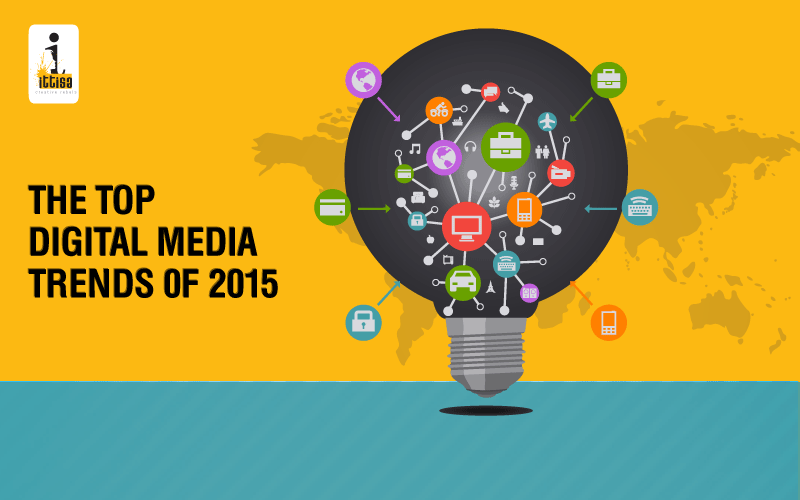 So far, it’s been a pretty interesting year for digital media. New trends have emerged which might spell a very different story for the future of this vibrant media. It would serve the world better to keep abreast with these trends so as to remain well informed and also benefit from everything the world of technology has had to offer this year.

Wearables:  Wearables are everywhere. From trackers to bracelets, they litter the tech market. Fitness gadgets have topped the wearable-related purchases made across the world. Smartwatches, too, have made headlines, with their swanky appeal and superior functionality.

Mobile video: The average internet user now consumes most of his or her content via a mobile device (cell phones, tablets and other smart gadgets). With screen sizes getting bigger with every new version of mobile phones released into the market, consumer behaviour has changed rapidly. Most video viewing now takes place on a mobile. YouTube revealed, earlier this year, that half its video views originate from a mobile device.

Connected cars: Both Android and Apple have in-car operating systems which will make appearances in specific automobile manufacturer’s new cars. This is a welcome trend considering 50% of global drivers say that connected car features will be critical when they choose to buy their next car. In-car advertising will also become a lot more sophisticated.

Pre-emptive technology: We’ve been moving towards a world of real-time updates and notifications. Even branded content and content distribution has become real-time. We noticed, at Ittisa, that in 2015, technology took it up a notch, from real-time to pre-empting. Content providers are predicting what we want to watch or read with improved recommendation engines, and by analysing our voice through wearables. Connected homes know when we’re on the way home and when to switch on the lights.

Mobile payments: Several advancements have happened this year, the most noticeable of which is the emergence of apps which make day to day life easier for the end consumer. This enables faster and easier payments as well, with mobile payments being boosted through every app. Smartphone penetration has increased exponentially in the last year. Banks also have individual apps which give consumers to option of making payments that occur monthly or bi-monthly (electricity, mobile, etc.).

There have been several other trend such as high-definition streaming of videos, print publications becoming digital-only propositions, increase in native advertising, and so on. However, the above-listed have been by far the most talked about and certainly the most beneficial advancements in the tech world. Connectivity has been the word that has made the rounds without pause, and hence, most inventions and improvements on existing devices has revolved around the same. Whether or not these trends are here to say, will be determined by their prolonged success, shelf life an longevity.