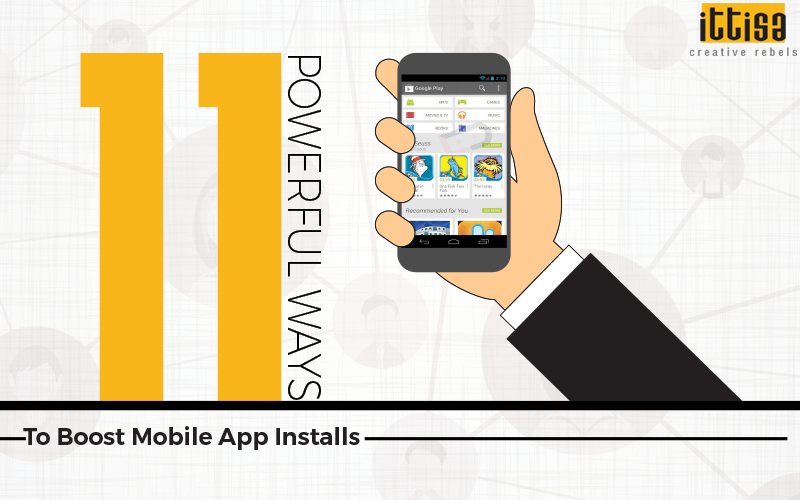 Most developers feel that the toughest job is creating an app out of nothing. The toughest job, however, is taking a new app to the market and actually getting people to install it. You may love your new app, its design, functionality and idea- but are people installing the app? App installs is not an easy feat to achieve.

There are various ways to go about it and not all of them involve spending a lot of money on marketing.  Scroll down to read the 11 most powerful ways you can boost your mobile app downloads without breaking the bank.

The first thing that appeals to a viewer is the app icon. The basics of creating an app icon mean ensuring that the app icon stands out amongst the clutter and is easy to recognize and recall as the user scrolls down the app store pages.

The design of the app icon should clearly portray what the app is, along with an intimation of what the user can expect when he/she downloads the app. A good app icon choice is based on the app’s aesthetic sense- bold and unique or simple and minimalist.

Be Creative about the App Label

The App Name should be creative, eye-catching and should describe the app in either one word or a combination of two words. A few basic tips for choosing a good app name:-Don’t use an app name that already exists-KISS – Keep it short and simple-Choose a name that reflects what the app does.

Social media is one of the cheapest and most effective ways of marketing a new brand without much budget. It is also the perfect medium to build a voice, a personality for the app and establish what the app stands for. Based on audience demographics, appropriate social media channels should be chosen to advertise.

It’s important to focus more on engagement in the early stages of marketing so that the audience becomes familiar with the product and starts to engage with it regularly.

With over a million apps in an App Store, getting a new app noticed is a big issue faced by mobile app developers today. ASO- App Store Optimization, helps to solve this issue. ASO is a process of optimizing mobile apps to help them rank higher in an app store’s search results.

With better ranking in search results, customers quickly become aware of the app. Similar to SEO results, the higher the app on an app store’s search results, higher the probability of it getting downloaded. The aim of ASO is to make searchers download the app by driving more traffic to the app’s page in the app store.

Use Images that Excite and Encourage

When a user installs a new app, it’s important to motivate him/her by using images that evoke a sense of excitement and to encourage him/her by showcasing images or videos of people who have enjoyed using the app. The most popular features of the app are best described by photos and videos and can be used to convince users that this app is better than competition.

App downloads increase if the app gets positive feedback from users. Makers should definitely look at increasing the number of positive reviews and ratings of the app, but at the same also concentrate on tackling bad reviews and learning from them. Organic reviews or actual feedback are more beneficial for the app than concocted ones because there is nothing to learn from the fabricated reviews. Here is a review of one of the restaurants on Zomato.

n order to maximize the number of visitors to your app’s website, it’s important that the app appears high on the list of results returned by a search engine. Tools to use- Adwords Keywords Tool, Google Analytics, etc. Using a few chosen keywords repeatedly throughout the app and in all communication out there on the Internet will help in driving organic installs.

If the app requires users to pay to experience it, makers can use temporary price drop schemes in order to build a sense of urgency and drive app installs. Hook users by giving them incentives and free trials. Personalised CTA buttons also help in increasing the number of installs. This can also be used to persuade users to upgrade the app to a premium version.

Invest time and energy in reaching out to relevant media houses, PR agencies and tech influencers who review new apps in the market. They can be used to publish a story around the app and reach out to an audience that matters the most. It’s necessary to pitch them the app as a story and not as an advertisement.

Focus on Users by Studying Analytics

It’s imperative to understand users and what motivates them before coming up with ideas to market to them. With Google’s Universal Analytics tool makers can focus on potential users. Actual users can be studied through user based KPIs.

Following these tips is a great way to begin to drive installs for the app, but it’s also important to remember that getting installs takes time and cannot happen overnight. Continuously updating the app, retargeting users with appropriate keywords, helpful documents and videos to assist users and ultimately the functionality, UI/UX of the app itself will drive installs.

Ittisa’s ASO Service is tailored perfectly to help apps reach their future users, wherever they are in the world. With more than 6 million apps on both PlayStore and AppStore, there is a lot of clutter and immense pressure to stand out in the market.

With our proven ASO techniques, committed team of ASO experts, and analytics used to fine tune every step of the campaign, we confidently promise app success whether your objective is visibility or installs. For case studies and further details, contact us here.