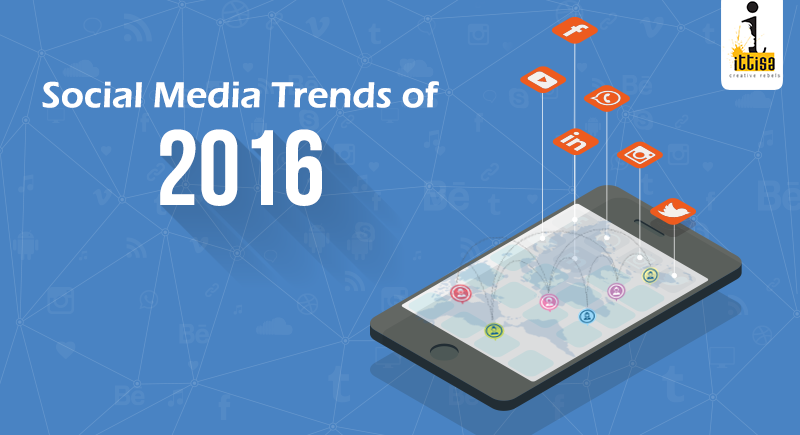 In 2015, consumer preferences, new software’s and platforms brought about a host of changes and opportunities for all the social marketers; because of which the social media strategy has subsequently evolved and will continue to do so in 2016.

Here are six trends of 2016 that social media marketers should keep an eye out for:

Now is the time to jump on the mobile bandwagon of on-the-go videos. Videos started ruling the social media posts in 2015 and will continue to do so in 2016! Consumers want fast access to live-streaming of events, thanks to apps like Meerkat and Periscope, it’s possible for brands to broadcast a live stream of world around them. Live-streaming reveals a much more authentic side of your business which is unfiltered and unedited. Neither of the video app services has completely taken over the live-streaming space, so both should be considered while creating a social media strategy.

Companies and brands are no longer in the driver’s seat. Customer dictates the content. While promoting the products, we need to build our social messages based on the customer needs. Rather than steering clients in what products and services a brand believes in, we need to make it into a conversation. Marketing tactics need to be adaptive of client and their behaviour.

Each year the window for real-time response grows smaller and smaller. According to Search Engine Watch, 70% of Twitter users expect a response from brands they reach out to, and 53% want a response in less than an hour. That number jumps to 72% when they’re issuing a complaint.

Faster response time is one of the key strategies, marketers need to implement in 2016. If you are not quick enough to respond to your customers, your competitors might be. You are expected to keep up with the fast moving pace of the social media, if your business has a presence on any of the social media platforms.

In 2015 we all saw a massive shift from text to media—but the competition for visibility has never been stronger. With more businesses building out their content strategies and the rising advertising costs, optimizing your organic content is at its highest demand. Although social media doesn’t directly influence your search ranking, greater social signals (such as people sharing your content and sending more traffic to your website) can help you rank higher. Why is this important? Because 33% of traffic from Google’s organic search results go to the first item listed.

Mobile devices have become the primary (not secondary) screen for most social media users. In 2015, mobile traffic finally overtook desktop traffic in 10 countries, including the US and Japan.

As of January 2015, 80% of Internet users own a Smartphone. An estimated 2 billion consumers worldwide are expected to own a Smartphone by 2016. Additionally, devices like smart TVs and smart watches saw a spike in popularity, and we’ll continue to see their adoption rise in the New Year.

Data is already a big part of how you measure social media success, but it’ll play an even bigger role in your 2016 strategy. Marketers have never had this much access to information about consumer preferences before. This data can help you personalize your message and focus on building stronger loyalty and long-term engagement—rather than short-term acquisitions and individual sales.